The History of the Cigar Store Indian 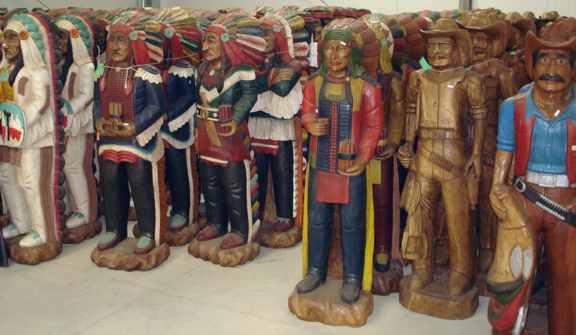 Many People have seen or at least heard of the famous cigar store indian which is present in (or traditionally outside) any well-established tobacco store. Why? Where did this thing come from and what is the purpose of it? Well I’ll tell you.

When Christopher Columbus came to the new world he was given a gift of Tobacco by the local indigenous people (some point in November of 1492 and somewhere in the Caribbean, surprisingly around what is now Cuba) He wrote about the experience in his journal and brought it back to Europe. Presto-Change-o , Europeans now relate this Tobacco thing with the “Indians” who introduced it to us. Quick side note the word “Indian” did not come from the old myth that Christopher Columbus thought he landed in India, at that time India was not known as Indian it was known as Hindustan. Columbus’s men and later travelers seeing these natives either naked or wearing what appeared to them as primitive clothing watched the way they lived off the land and coined these new people “Ninos Indios” or translated into English “The children of God” Later it was easier to condense that into Indios and the English tried to pronounce it, it came out as Indian.

Fast forward about 150 years into the future. The English start settling in the new world, most of them, like most people then are illiterate. So if you owned a tobacco store it wouldn’t make much sense to have a sign outside that said “Tobacconist.” Instead you would be able to attract more people by painting a picture of an Indian on the outside wall. People see that and now know “Oh, hey, tobacco!” (This is also the reason for the three balls representing a pawn shop and the barber pole, etc.) Ironically however the English settled a couple thousand miles north of where tobacco was first discovered so they’re version of Indians is much different from the actual people that led to the whole idea.

Industrial revolution hits. Let’s say you had a job making ornate carvings for wooden tall ships, bad news, you’re going to lose your job soon. Steam ships are taking over and instead of wood and sails its Iron and coal and steam. Well, you have a family of about 6 and all your sons have been learning your family carving trade and the future is looking kind of bleak, what do you do? Well you go to your local tobacconist (at the time there were many, many tobacconists) and you say “Hey, how about I carve you a giant wooden indian to put out front instead of you having to paint one on the side of the store every few years. They say “yes.” Again most people at this time are illiterate.

Here is where it gets even more interesting. Around the time of the Industrial revolution in big up and coming cities there were very few actual Indians. So many of the original cigar store Indians resemble African Americans, which the carvers used as models. So let’s recap. Caribbean “Childen of God” to Northeast Native American to African American with feathers.

And so you have it. Weird.