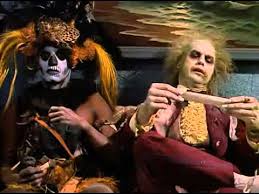 Having been in the cigar business for years I have noticed odd and unusual occurrences in our Lounge as well as many others. Whether these situations stand out due to their ironic nature, coincidence, or whether it is just a group situation which occurs outside the “bell curve” of social norms, some pretty funky things happen when you watch a cluster of customers smoke cigars together. Call me Jane Goodall but I started documenting my observations for three reasons; the benefit of the cigar-blog-reader, the sake of science, and because it’s pretty damn funny.

The Waiting Room to Hell: This is when the lounge is full of older, unfortunate, miserable, vulgar, cutthroat bastards. It would be as if a guy named Virgil took you on an epic voyage of the underworld and right before you met a dog with a corkscrew tail and three heads you walked pass a waiting room and peered in.

Statler and Waldorf: The two old guys from the Muppet Show. We have them as customers. Every now and then they come in together and feed off one another and decide to give a condescending, sarcastic play by play of the actions of the rest of the cigar shop. Usually this is only steered in the direction of the staff however no one is really truly safe.

The Saint Valentine’s Day Massacre: We have chairs. We have nice comfy leather chairs. We have a poker table with chairs as well. But for some reason, once in a blue moon everyone is standing up against the wall. I assume the same force in nature that guides a hundred birds around and tells them to turn at the same time or that causes flowers to all lean in the same direction also causes this.

The Odd Couple: One of my favorites, this happens when two people who seem as if they would never sit down and talk for an hour or two are brought together in the lounge by the love of enjoying a great cigar. For example, a young, punk rock, horror movie enthusiast with an orange Mohawk and half a dozen facial piercings sitting down and having a great conversation with a formally dressed, older retired conservative gentle man. As a side note you can usually tell it’s a good conversation because more than often the Ellen Show or something similar will be on TV without them paying any attention to what they are watching.

Land of the Lost: This anomaly happens when everyone in the room is dressed in a style of clothing from a different generation. For example sometimes Everyone in the lounge is dressed like they live in the early 1900’s, usually it’s your younger hipster Mumford and Son’s look-a-likes and a couple older bowtie wearing, halicap adorned gentlemen. Another example is last week I had a crowd of people that look like Bruce Springsteen and the East Street Band from the early 80’s.

Parliament: Happens more often than usual. Someone breaks out the politics and the floor is now open for debate. A true “Parliament Lounge” is when it gets so heated that people actually start to stand up when they talk.

Lull: When a lull comes over the crowd. The funny thing about this is it usually happens for two completely different reasons; either everything is so tranquil that all the customers smoking have reached nirvana or that things are so tense or awkward between the people in the lounge that no one dares spark up (no pun intended) conversation.

Wallstreet: When everyone in the lounge is on their laptop or ipad doing business or checking emails. My favorite is when they break out the Bluetooth and you have 6 people all wearing headsets and no one is talking to the person sitting next to them and all you can hear are deadlines and numbers and ”What do you mean Karen didn’t receive the disclosure act!?”

Prohibition: Sometimes customers will bring in a bottle of their favorite spirits into the lounge. What usually happens is they will open them, drink half and not want (or legally be allowed to) bring the other half home with them. This leads to them hiding or stashing them somewhere in the niches and nooks of the room. People forget. Fast forward 6 months and in every draw you open or behind every book you take off the shelf there’s a bottle, just like they had to stash a hundred bottles because a team of 1920’s federal prohibition agents were kicking in the front door. One day I found a bottle duct taped to the bottom of the coffee table.

That’s the list so far, please comment with any strange and unusual lounge circumstance that you have noticed while enjoying a cigar at your local tobacconist!