The Proper Way to Cut and Light a Cigar 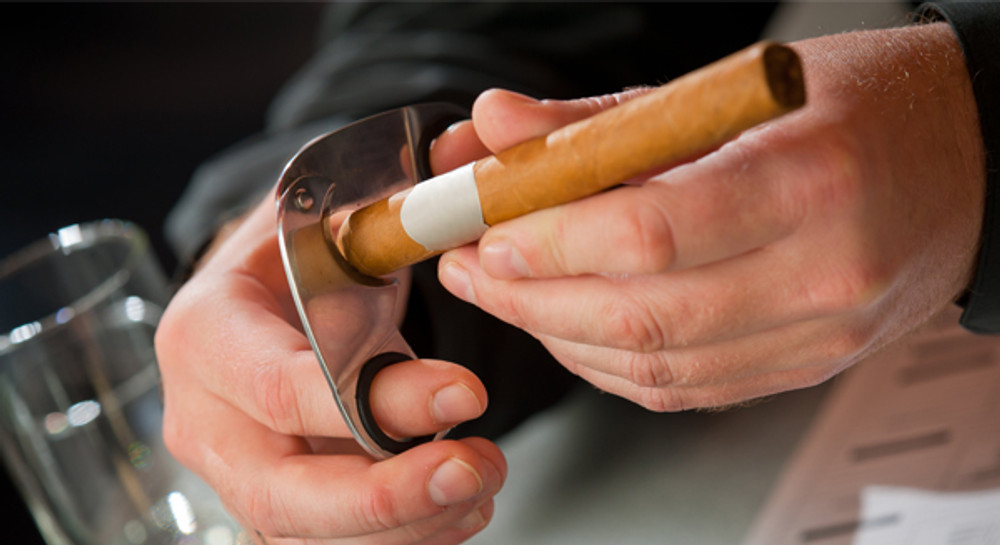 There is a right way and a wrong way to cut and to light a cigar. Here are some overall tips from Cigar Aficionado and NH Cigars.

There are two ways to cut a cigar properly, the “guillotine “and the “punch” methods.

When you use the Guillotine method, you will “guillotine” the head of a conventional, blunt-end cigar and shave away the minimal amount needed to ensure an easy draw. You don’t want to take off the entire cap because you will wind up with a mess. It can be tricky for a beginner, therefore some manufacturers offer guillotine cutters with a built-in backstop to prevent you from chopping off too much. Those cutters aren’t necessarily the right choice when you need to cut a pointy-ended cigar, so traditional, open guillotines are still more commonplace.

The Punch method can be tricky. If your cigar is a tad dry, you can crack the leaf with even a small amount of pressure. But in general, if your cigar is properly moist, you just gently press the punch into the head, rotating in a back-and-forth twist, until the cutter enters the cigar. Sometimes, if your cigar is large and your punch is small, you’ll want to make multiple cuts: two punches side by side, three in a triangle shape, or even four in a clover shape.

As for lighting a cigar, it is not like lighting the tip of a cigarette or the wick of a candle. Patience is the key, and mistakes happen, so don’t allow it to ruin your smoking experience. A “properly lit” cigar is important because it means all the components (wrapper, binder and filler) will be evenly lit, allowing you to enjoy it to its fullest. Additionally, you won’t be fighting an uneven burn while you're smoking. Here are some tips from Cigar Aficionado:

1. Light your cigar the same way you would toast a marshmallow over a campfire, keeping the cigar above and near the flame, but don’t let them touch. Burning a cigar directly in a flame makes it too hot. If that happens, be calm, and move your smoke back out of the flame. As with a marshmallow, you’ll want to rotate the cigar so all parts of its tip are equally heated. Be patient and keep at it until there’s a glowing ring all the way around the cigar’s tip and the edges are thinly blackened.

2. Raise the unlit end of the cigar to your mouth and take the first puff. It should burn evenly while drawing, If it doesn’t, take the cigar out of your mouth and touch up the end with the flame. You can also try to gently blow on the embers to create a smooth, completely rounded as

3. Avoid lighting a cigar with a flame from a source that will alter the essence of your cigar, like Zippos, oil-fueled lighters, and standard sulfur matches. These lighting sources can add odd flavors to your smoke. The best way to get the perfect light is to use a lighter designed specifically for cigars, with butane for fuel and a flame (or multiple flames) wide enough to easily light a cigar. There are many of these cigar lighters on the market and some are available at Tobacco Haven.